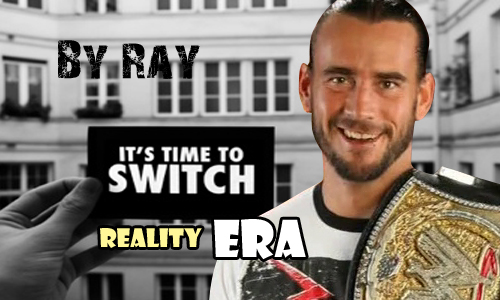 Welcome to the 8th edition of my point of views. This week, I will be discussing how I think CM Punk’s shoot promo has led to a new Era. The Era I like to describe it as which I came upon on Twitter as the ‘’Reality Era’’. So read on to find out more! Hope you enjoy.

The year is 2011 which is a decade since the thrilling Attitude Era. The Era we loved admired and couldn’t get enough of. Each week was exciting and remarkable which I think we all can agree on. But since the aftermath of the imperishable Attitude Era, us pro wrestling fans haven’t been excited or as thrilled as what we were use to; we were spoilt. People have many reasons but in my opinion the reason is due to lack of competition between pro wrestling companies. During the Attitude Era we saw the very best in WWF, WCW and ECW. ECW wasn’t that big of a threat but it was an extra show we could watch. When we look at pro wrestling before June of 2011 I can safely say that we older wrestling fans were questioning why we watch wrestling these days. So what happened? A guy called CM Punk came out and makes wrestling fans proud to call themselves wrestling fans. What did he do you may ask? CM Punk created a ‘moment’ and made it historical. Punk did something that few wrestlers in the WWE have the ‘’balls’’ to do, he spoke his insightful and genius mind. Punk spoke of how he has been treated as a WWE employee…saying that he was mistreated and that he should be the man of the cover of PPV posters, on magazine covers, talk shows etc and that it shouldn’t be John Cena, he stated that he disliked the idea of John Cena being the best. Then Punk said ‘’Your not the best (At Cena) I am the best, I’m the best in the world’’. So what happened? Sure, it led to an excellent 5 star match but it opened up a whole new chapter in WWE’s historic book. So let’s see what that jaw breaking promo did.

As I said, it opened a new chapter. When I say chapter it also means Era. This new Era seems to be dubbed as the ‘Reality Era’. From what we are seeing so far….we very well could be seeing the end of the unbreakable and evil character that is Vince McMahon. We seen him left heart broken as the young and accomplishing Triple H announced to him that the board of directors had a meeting and said they Vince’s time seems to be up, with the approval of Vince’s family he had no choice but to step down and let someone else in and that man is Triple H.

Since Punk’s shoot promo we have seen multiple promos and segments with Punk himself, Vince and Cena, they have been by far the best worked that we have seen since the Attitude Era. Finally again we can see some ‘’realness’’ in wrestling. The mix between art and fiction seems to be coming to life and provides us with hours of weekly entertainment and hours talking about it in person, discussing it on the internet, reading it from newspapers, magazines, listening to audio, wanting to write about it yourself, wanting to re-watch what we’ve just seen….basically just having that urge back to wanting to love and adore wrestling. Raw is now full filled and exciting again; it’s unpredictable. Sure there will be stupid booking like giving Rey the title and taking it off him that night…but it’ll lead to something bigger for us, the fans watching at home, watching at the event, fans reading it online… even if it’s unfair or not…it’s just the way it is. Anyway, that shoot promo led to one epic month and hopefully an exciting new Era. But, were we lucky to see all this?

What if CM Punk was given a script to read out that night? Would Vince of been taking out as a character on screen? Would Triple H be in the role he is playing now? Would JR be an announcer on Raw now? Would Zack Ryder of been moved to Smckdown? There’s hundreds of question that we could ask with ‘’What if’’ CM Punk didn’t do what he did. Bottom line is, I strongly believe this is the beginning of a new Era. An Era described as Reality, the ‘’Reality Era’’. So as we’ve watched, read, listened, talked about last few weeks….WWE is at a different level of enjoyment for viewers watching their product and changes have happened such as better quality wrestling matches, JR returned, finally WWE are focusing on Zack Ryder little more, Jomo returned at a great time to occupy R-Truth in a feud, Triple H is in a new corporate role, we seen a breakdown in Vince’s character, stuff like that that is changing which we haven’t seen in years. Also other reasons why I believe wrestling is on it’s way back to enjoyment is because T-Shirtsare sold out, I have few friends getting back into……just watching people praise the shit out of WWE on twitter, chats, forums etc.

But the thing I love MOST about this storyline is that it’s showing us how great John Cena actually is. He’s been wrestling great, pulling off great segments and promo’s, showing really emotion. Also what it’s doing…it’s keeping attention off the Rock, but yet the Rock is still there in your head, you’re just not thinking fully about him but he’s still there. Rock will appear at Survivor Series and he’ll probably be in a match that Cena will hand pick for him to be in. Then, stuff will build up from there and hopefully that storyline will live up to the potential we all know it has. So if you understand what I’m saying, Rock vs Cena is still another big storyline that will kick start properly coming up closer to Wrestlemania. So I can see WWE changing for the better as it seems to be doing. Only thing that I would knock about this is that I think WWE should of teased us with the new theme ‘Cult of Personality’ then have Punk would out few weeks later to it.

Well that’s what I have for this week. As always I’m hoping you enjoyed reading this. So I guess we’ll just have to watch this rollercoaster ride and enjoy it along the way to see what happens next. Thanks for reading.

5 thoughts on “From Ray’s Point of View: Column 8”