The Muppets… THE MUPPETS?! 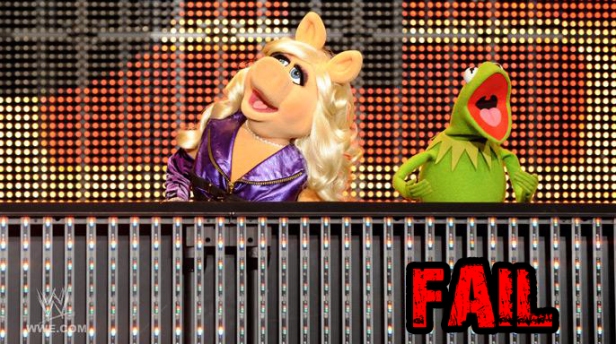 I couldn’t believe my luck when I heard The Muppets were guest hosting Raw… Yeah, right! The Muppets are worldwide  famous characters for children’s TV programs and this is exactly why I had no interest in The Muppets guest hosting a wrestling program that is the longest weekly episodic TV show in history. The Muppets is a TV show for kids, and whilst I know that the WWE have went all PG on our asses I still felt like this was a kick in the teeth.

I know that most of the guest hosts don’t have anything to do with wrestling but many of them can be entertaining; The Muppets, however, were rubbish. The whole show seemed sloppy and many could have though that The Muppets wrote and booked what went on. The Rock agreed to Cena’s proposal and… Wait, WHAT?! Holy lord, who on earth wrote this sh*t?  The Rock who is facing off against John Cena at WrestleMania next year in Miami in the main event agrees to be on the same team as Cena, and yes I did listen to the promo and I know that The Rock tried to convey how he didn’t want to partner Cena but yet, due to his fans felt like he had to. He said that many of the Team Bring It members despise The Miz and R-Truth. The Rock may have been beaten down by Awesome Truth at one point but at the same time The Rock isn’t on Raw enough to be a part of the Awesome Truth’s revolution. Maybe if you disagreed with that you have to agree with me that The Rock, no matter what hates Cena which is reason enough for him NOT to tag with Cena. If you’re wondering by now both The Rock and Cena are the second pair of Muppets.

Miss Piggy and Vickie had a little dispute during the evening; when they both faced off in an “Excuse Me” battle. One word summed this up; boring. The whole segment featured Miss Piggy, Vickie Guerrero, Kermit the Frog, Jack Swagger. Oh, then Kelly Kelly came out in a pirate costume and kissed Kermit. That was great, really interesting, a great introduction to the Divas battle royal NOT. Kelly kissing Kermit vs Edge and Lita sex segment in the middle of the ring; I’m not a perv but I think we all agree on which is better. By the way, just as I’m on the topic of Lita she lives in Atlanta, JR tweeted that he ran into her in Atlanta but yet WWE didn’t get her in to do a segment. One of the most liked female wrestlers in the world in the city but WWE pass up the opportunity. Yeah, that was a good one WWE.

Two of the Muppets were then concocting a Muppets energy drink whereby it would increase speed, power, agility and fresher smelling breath… I hoped this would work within the lines of the Wellness Policy and apparently it did because during Santino’s match one of the Muppets gave Santino the so-called energy drink. Santino spit it out cos it tasted damn awful which sprayed Swagger in the eyes (shades of Tajiri anyone?) and allowed Santino to get a weak looking roll up pin.

The segment that everyone was looking for between Sheamus and Beaker came when Christian was caught bullying Beaker. Sheamus broke it up, told Beaker that he couldn’t make it to the family reunion and that Beaker was to tell Aunt Theresa that he said hello! Hi. The funniest part of this segment came when Sheamus fixed Beaker’s very ginger hair.

One of the segments on Raw involved Gonzo and Fozzy whereby Gonzo claimed he could be WWE champ if he put his mind to it… Yeah right, Swagger and Ziggler stretched the arms of Gonzo round his head, still not amusing me yet. Gonzo then wondered how ZigSwag knew he need an arrangement. I didn’t get this segment, pointless and stupid, not to mention stupid.

After the Michael Cole segment we watched as the cameras panned up into a VIP box, where there were two older Muppets, who said that the only thing that was worse than listening to Michael Cole was… wait for it… NOTHING. I think I forgot to laugh at this, did anyone else forget to laugh?

Backstage and we see Miss Piggy feelin’ up on JoMo’s six pack, she then proceeded to ask JoMo out on a date to which he politely declined, but had the dashing replacement of Hornswoggle. Hornswoggle flashed his tats to impress his gurl, after impressing her he then gave her a kiss, BANG Miss Piggy hit him in the gut and walked off. Kermit then walks on set and tends to Hornswoggle who then feels his heart warm up with his love for Miss Piggy yo’! Kermit then states that this show (WWE Raw, if anyone forgot is a wrestling program) is even weirder than their show and then gets bagged by Cody Rhodes. The best thing about this promo was the shot in the gut Hornswoggle took: Miss Piggy 1 Hornswoggle 0 if anyone is keeping score.

The old guys returned whereby one of them done Cena’s you can’t see me hand shake, to which the other guy said that he couldn’t see anything. The old guy who done the hand shake then got dizzy and fell off his chair. I fell off my chair laughing at this. (Sarcasm) The only point for this segment was that Cena was out next against The Miz.

Overall, I thought Raw was disappointing, The Muppets failed to amuse me mainly because too much time was spent on the Muppets and not enough time on the wrestling. WWE, or Vince, needs to remember that although it is good to bring in some famous faces that WWE is based on wrestling and the only reason WWE are so popular and have the top two longest running weekly episodic TV shows is due to the wrestling. Maybe I’m too old to appreciate the Muppets, and I’m sure the kids enjoyed the Muppets but it isn’t only kids that watch WWE, us adults watch WWE too and this is why I felt some of my teeth were kicked in.

That’s all I have on the Muppets for this week, but it isn’t the end of the article. Below you can see a poll, by which you can vote for your favourite WWE Diva Halloween costume. Although my favourite Diva is Eve, my favourite costumes were the Double Trouble bunch The Bella Twins. I thought their costumes were very cool and were different from the usual famous pair costumes (Bonnie and Clyde, Batman and Robin, BamBam and Pebbles, Superman and Superwoman so on and so forth)