My Picks To Win At WrestleMania – By Emma

The Rock vs. John Cena

This match has given us many funny sayings and great promo’s leading up to it. When it is all said and done I believe this man will have his hand raised in victory… 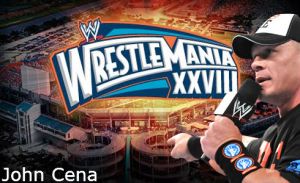 First off, I want to point out this does not mean I am a Cena fan, not saying that at all. I feel John Cena will win because 1) All the little kids will be happy 2) While the Rock has been gone Cena has still been there and has been talking about the match and The Rock without him there to interupt trying to get more people behind him. The Rock is big too which made it hard for me to try and predict who would win. Either way I see Cena winning this match up. I mean John Cena has to have his big Mania moment doesn’t he?

The two guys who claim to beThe Best In The World. We will truley see who the best is at what they do when the bell rings to the end of the  match….

Yes we all know I hate Jericho. But that has nothing to do with my prediction of The Straight Edge WWE Champion winning. CM Punk has been working hard to remain WWE champion. Having to deal with his many issues with John Laurinaitis and still being able to win. Also Punk has the ability to take everything dished at him and still win the match in the end. We saw this with Cm Punk vs. John Cena. And he is very good at reversing and making himself end up in a better postion as we saw in CM Punk vs. Daniel Bryan on Smackdown. Jericho won’t be able to deal with Cm Punk always finding himself in a better position.

I have never been much of a fan of either these two men. They both have a chance at winning. Bryan with his cheating ways or Sheamus with his pure power. I think Power will beat cheating in this one.

Sheamus shows pure strength and power in all his matches. That means he has actual skill. Daniel Bryan seems to more so resort to cheating when he can. However, cheating can only get you so far. Eventually you will need skills. Not that Bryan doesn’t have skills. But Sheamus is just all around better than Bryan. Sheamus proved he is worth to be a champion when he became a WWE champion so quickly in his career. It is time Sheamus adds World Heavyweight Champion to his list of acomplishments.

Undertaker vs. Triple H: Hell In A Cell Match

With the Undertaker sitting at a record of 19-0, will we get to see him go 20-0 or 19-1? Despite not wanting to fight Undertaker at first, Triple H has taken on the challenge known as The Deadman. Who will end up winning….

The Undertakers streak has always been important to WWE. That is why he always returns around Mania time. I do not think WWE would be ready to end the streak. I feel it will be a great match no doubt. Watching really all we have left the older WWE in a Cell would be a great way keep Takers legacy alive.

These picks to win are not at all based on who I like more. These are my opinions. What do you all think?