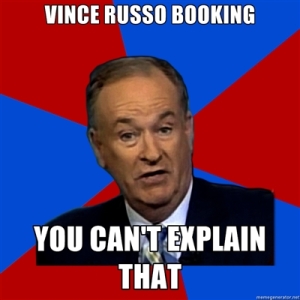 Welcome back to “I Can’t Believe It’s Not Russo!” This week is the 4th and final article chronicling how we’d go around reviving the NWO. Last time out we finally saw the NWO come back together. The initial three members of the revived stable are Kevin Nash, Dolph Ziggler and Brodus Clay. The NWO’s finalised return happened on the Raw removed from TLC. Ziggler retained the World Heavyweight Title with help from Brodus Clay and Kevin Nash. The following night on Raw, they jumped John Cena and went retro on him. The T-Shirts were back, and the show culminated with Cena being branded with spray paint with the initials “NWO.” This article will be closing things up, and will look at some potential ideas going forward for where we could take the NWO.

So, this ends the beginning of a revived New World Order. My initial revival group of Nash, Ziggler and Clay may seem bizarre, but it is logical. Clay should be a heel in the first place. I also think his association with the stable along with a heel turn would see him burst into the main event. This is especially true if the rumours surrounding Mark and retirement are true. Not to mention Tensai having been a bit of a disaster, to put it mildly.

Ziggler is a charismatic, fantastic worker who is one of the best heels in the company at the minute. Ziggler’s involvement in the NWO is a no brainer to me. Eventually he would graduate to leading the revived NWO, but that would come later in the story.

Nash has to be in. As I said previously, if you are going to revive the NWO then you must involve one of the originals. Otherwise you don’t have any logic for it being brought back. You’re just reviving the NWO for the sake of reviving the NWO, which is pointless booking and it should be banned. Given the status of Hogan and the personal issues of Scott Hall, Kevin Nash is the only option you can really use to reboot the company. Eventually I would have Nash thrown out by having the organisation turn on him, potentially replacing him with Randy Orton or John Cena.

Either’s reasoning for joining would be that they’ve been thinking a lot about the claims of the NWO about the WWE being complacent and resting on its’ laurels. They would elaborate that they feel they are just as guilty as the company and they want to wake up to reality and stop being Vince’s puppets. Nash would be booted out by Ziggler, Barrett and Clay. Ziggler would take the mic and say: “We have a problem with the group. That problem is you. This is supposed to be the New World Order, and to be frank, there’s nothing new about you.” Cena or Orton would run out, appearing to make it 3v2 before hitting Nash with the AA or the rKo (depending on who you choose, obviously), completing the turn and justifying why they were joining. I’d rather go with Orton. He’s a natural heel currently masquerading as babyface. This would fit nicely with the concept about the NWO coming back to kill what they see as they WWE’s complacency. It would also be a great fit for where Orton’s character is currently.

I mentioned Cena because I know for a lot of people a Cena heel turn is a Smark’s wet dream and I think a lot of people would love to see it happen. I subscribe to the viewpoint that he already is a heel to people like myself, but that’s a different discussion for a different article I think.

From there you have a three man stable. You’ve brought back the group, you’ve linked it to its’ past and you’ve also got three guys ready to cause absolute chaos in the WWE. You can go where-ever you want. You’ve got Sheamus to return at some point for a grudge match against whoever you choose in the group. You could even bring back Jericho under his “Save Us” gimmick, not to mention that he’d be seeking revenge on Dolph Ziggler for his contract being terminated.

There’s a literally a whole list of top guys you could potentially have as opposition, this really could set business up for a long while to come. You could extend the group by a couple of members plus Barrett if you so wished making it a six man stable. All full of top heels. I was considering an angle at some point where a Drew McIntyre type character attempts to pledge his alliegence to the NWO but is unceremoniously rejected, recieving an rKo for his troubles with Ziggler taking the mic and saying: “We do not accept mediocrity” or something like that.

Let it be clear. I’m still not of the opinion that bringing back the NWO is a wise move. If it didn’t take off it would really hurt the careers of the guys involved as well as potentially ultimately hurting the groups legacy. I wrote this as an exercise, to see how I would do it if I was locked in a room and I was forced to revive the NWO. Of course, the potential rewards would be massive, but at this point in time the WWE doesn’t need to take risks. It’s the only game in town and Vince knows it fine well. If you don’t need to take risks, why would you bother? As a viewer I am frustrated with the company, but at the same time I understand why those in charge are pursuing the course that they are.

So, we’re finally finished. This really has been the definition of rambling, so to those of you who’ve pulled through with me I humbly thank you for investing the time in seeing this through to its conclusion. I’ve actually had quite a bit of fun in the time it’s taken me to write this article spanning just over 4,000 words in its entirity! Anyway, let me know if you’ve enjoyed it and get back to me with feedback. This is my first attempt in trying to write a coherent angle, so please be gentle…

7 thoughts on ““I Can’t Believe It’s Not Russo!”- Booking an NWO Revival Part 4”