“Ringside Review” is finally back! After a four week sabbatical, we’re going to be looking at the wrestling autobiography that really set the standard, and one by which most attempts are measured against 13 years after its initial release. I am of course talking about Mrs Foley’s Baby Boy’s first tomb, one which go on to be a New York Times best seller: “Have A Nice Day: A Tale of Blood and Sweatsocks” by the one and only Michael “Mick” Foley.

Foley’s career spans from 1983, when he first trained at Dominic DeNucci’s wrestling school to the present day. “Have a Nice Day” takes us from his forumulative years to the start of his career in 1983 right through to the 29th December 1998 when he won his first WWF Title. The show was aired on January 4th, 1999 – which was when Tony Schiavone infamously said “That’ll but bums on seats” after giving away the result of the taped Raw. 500,000 people switched over to Raw.

On a side note for the wrestling history buffs out there as well, this was also a monumental moment in WCW history as the title also changed hands on Nitro. Hulk Hogan took the belt from Kevin Nash with the mighty “Fingerpoke of Doom.”

Back on topic. The book takes us through Foley’s career. We see a young Mick starting starting off on his mentor’s cards as well as appearing on squash matches on WWF tapings. One of these matches included a match against the British Bulldogs – The Dynamite Kid and Davey Boy Smith (later to be called “The British Bulldog”) where Foley was hazed that severely he couldn’t eat solid food for weeks afterwards. From there Foley spent the majority of the 80s working for the territories. He clocked up experience in promotions such as the Universal Wrestling Federation and World Class Championship Wrestling.  However, Foley’s first big break in 1991 when he joined World Championship Wrestling (he’d had a brief spell which hadn’t amounted to much in, when he re-debuted to feud with Sting. It was also in his time with WCW that Foley lost his ear at a show in Germany in a match with Vader. For those of you who don’t know how, I won’t spoil it. While he had some success in WCW, some of the issues which plagued the promotion and ultimately led to it’s demise were evident even back in the early 90s, which led to Mick Foley taking Cactus Jack to seek pastures new.

Foley found it. “Extreme Championship Wrestling,” better known as ECW was just beginning to take off. Foley, who’s style was almost a forbearer of ECW’s was a natural fit. He’d begun working there under a working relationship with WCW, but after his contract ended ECW became his main North American employer (although he did work for Jim Cornette’s “Smokey Mountain Wrestling” promotion) while he also completed tours in Japan. He had two tag title reigns with Mikey Whipwreck in ECW, but these weren’t what defined his stint there. Foley’s ability to reinvent himself really came to the surface. He turned heel by feuding with Tommy Dreamer, by trying to convince him not to meet the bloodthirst of the ECW fanbase and by aligning himself with Eric Bischoff. The same man who was seen as the nemesis and arch enemy of the ECW fanbase. He attempted to act as a “saviour” by trying to get Dreamer to join WCW to save both himself from the fans and Jack’s soul for endorsing him by declaring Dreamer to be “Hardcore.”

Alongside his working for ECW, he also worked in Japan in some of the most brutal matches imaginable. I don’t want to spoil some of the details for people who might not know, but they really have to be seen to be believed. On Foley’s return from one trip, his wife stated that she could smell something burning. Foley replied “I think that might be me.” The brutality of some of those matches made ECW look PG in comparison.

After leaving ECW, “Mike” Foley went on to the WWF as a new character: Mankind. He was brought into feud with The Undertaker, who had been constantly put in feuds with guys who couldn’t work their way out of a paper bag. Giant Gonzalez and Diesel (again, better known as Wrestling God Kevin Nash) being two prime examples. Foley and Taker’s feud would culminate at King Of The Ring 1998 in the now infamous Hell In A Cell match up where Mankind was thrown from the cell and then chokeslammed through it.  The book ends with Foley taking the belt from The Rock on Raw, leaving Mick on top of the world for the grand total of 26 days till Royal Rumble.

So, to wrap this thing up. This wasn’t my first autobiography I read (A Lion’s Tale takes that dubious honor) but upon re-reading it it’s easy to see why this is the standard. I think even though there’s been more attempts that have followed the style this is still possibly the best. There’s some self-deprecation and a high dosage of honesty, not to mention a real flavour of who Mick is. I feel like I’ve made this point so many times but books that have the voice of the author are so much better than those which are ghost-written. The fact that this book was originally meant to be ghost-written and was nixed by Foley himself speaks volumes for the man and the book. It would’ve been far easier for him to go down that route but the fact that he chose to take the time and handwrite the book (no typewriter’s and I don’t think Laptops were on sale in 1999 when this would’ve been written) is a testament and an act which has changed how wrestling autobiographies are written. 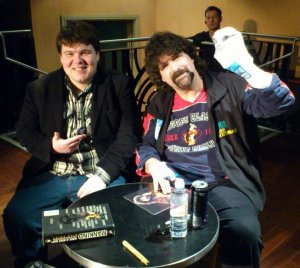 6 thoughts on ““Ringside Review”:”Have A Nice Day! A Tale of Blood and Sweatsocks”-Mick Foley”