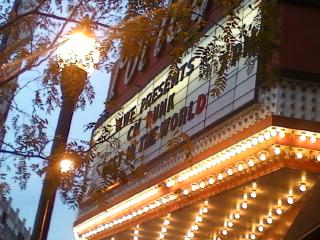 Earlier this year in August, I attended Wizard World in suburban Chicago and met CM Punk. During the Wizard World event, Punk had a Q&A session and I reported what Punk said here at Wrestling Rambles. During that Q&A, Punk said that he would premiere his new DVD in Chicago a week before the DVD was released in the United States. That premiere happened tonight and I attended it.

When Punk first announced that he would premiere his DVD in Chicago, I wasn’t sure that I would try to attend it. I thought he would premiere it in a theater located in downtown Chicago and I didn’t really want to go downtown. Parking is always difficult downtown and I also didn’t feel like driving that much into the city. When Punk revealed his DVD would premiere at the Portage Theater, I found out that it wasn’t located downtown. It was about 20 minutes from my house. The premiere was supposed to be this Sunday. There was probably a scheduling conflict and Punk said that the premiere was moved to Thursday night. This was not good news for me. Unlike Sunday, I work on Thursdays and where I work is not 20 minutes from the theater. I work away from the city so instead of being closer to the theater, I was farther away. Not very far away. It only took me an hour to get to the Portage Theater today. I am very thankful that CM Punk is from my hometown because a CM Punk in New York couldn’t say CM Punk’s DVD premiere was only an hour drive from his or her workplace.

It didn’t bother me that I had to drive a longer distance. I was okay with that because driving one hour is not really that bad. What I was worried about was that instead of being able to get to the theater very early, now the earliest I could get there was two hours before the start of the DVD screening. I read online yesterday that people were lining up outside the theater at 8:30 PM which was 22.5 hours before showtime. I thought, “There’s people in line almost 24 hours before showtime and I am planning on arriving only two hours early? I have no chance of getting in.” The theater was going to let in only 1,000 people. That sounds like a lot of people, but it’s CM Punk’s DVD premiere and it was free. It was hard to believe that there wouldn’t be 1,000 people in line by noon. I wasn’t going to skip work so I went to work today knowing that by the time I left work, I would probably have no chance to be one of the first 1,000 people at the theater.

At lunchtime, I checked for an update. I went to CM Punk’s Twitter page and I read that he bought pizza for everyone who was waiting in line. My first thought was that Punk is a great guy and then I thought that the line couldn’t have been that long. Punk’s not going to buy pizza for 1,000 people so I thought that maybe I had a chance. When I left work at 4 PM (the premiere started at 7 PM), I decided to go to the theater. I didn’t care if I drove an hour and then had to turn around after finding out that the theater was already full. I was going to risk it because you don’t get many opportunities to see the world premiere of your favorite wrestler’s DVD. I parked a block away from the theater a little bit after 5 PM. I walked towards Milwaukee Avenue where the theater is located and I was expecting to see a long line. And when I got to the street, I immediately saw a line. But when I got closer to the line, I saw that the distance from the theater to the end of the line wasn’t that long. It was a long line, but it didn’t look like 1,000 people long. I got in line and other people joined me in line. One of those people decided to count the people in line so he wouldn’t wait in line for nothing. He came back a few minutes later and said he counted only 300 people. He said he saw the WWE production crew there and the guy who hosts the WWE Pay-Per-View pre-show (Scott Stanford) was interviewing people. About 30 minutes later, the theater started letting people in and I was one of those people. 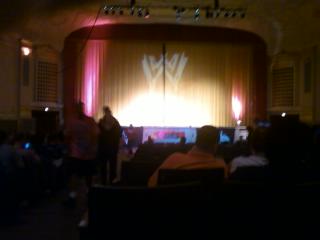 There was a good crowd in the theater, but it was not completely full. I felt sorry for those who waited all day, but at least they got a free pizza. The theater showed some CM Punk trivia and WWE DVD trailers before showtime. After that, Chicago comedian Marty DeRosa started introducing the special guests. If I remember correctly, the first guest was former WWE Women’s Champion Lita! If you didn’t know, Lita is Punk’s girlfriend. I had an aisle seat and it turned out to be one of the best seats in the house because that was the aisle the guests walked through on their way to the stage. Lita walked right past me and after her was Cliff Compton who wrestled as Domino in the WWE. After him was Colt Cabana and the last guest was the WWE Champion CM Punk. It was awesome to see all of those famous wrestling stars walk right past me. CM Punk did a brief introduction before the documentary from his DVD was shown. Punk said a year ago, he asked for WWE ice cream bars and CM Punk the movie. He didn’t get the ice cream bars, but he did get CM Punk the movie.

Punk asked for his DVD to start and the theater started showing the beginning of “Inside Out” starring Triple H. CM Punk immediately demanded that the movie be stopped and said that it was the wrong movie. Obviously that was a planned spot, but it was funny. After that, the CM Punk documentary began and it was awesome. I have read some really good reviews about Punk’s documentary and it was as good as people said it was. What I really like about the documentary is that it did a great job covering Punk’s early wrestling career before joining the WWE. I saw some early CM Punk footage that I have never seen before and it was footage that is probably hard to find unless you are a tape trader. The stuff on his WWE career was excellent too and there was information that even the biggest CM Punk fan probably didn’t know about. If you like CM Punk, you will love his documentary. I loved every second of it and it was very enjoyable. It was funny too. It is definitely among the best WWE documentaries I have ever seen. I think the DVD is available in Europe right now and the DVD will be released in the United States this Tuesday. I would definitely recommend buying the DVD. That’s what I’m going to do as soon as it is available.

After the documentary was shown, Punk got a standing ovation with CM Punk chants and a “That was awesome” chant. Punk mentioned that some people in the audience got free pizza earlier and now everyone was getting milk and cookies. And Punk wasn’t joking. There were hundreds of cookies with a X on them and many cartons of milk too. Punk said the cookies cost him $800. Colt Cabana was one of the guys passing out the cookies. Punk did about 20 minutes of Q&A and there wasn’t really many interesting answers. One of the things Punk talked about was what he was going to say before his mic was silenced during his amazing promo on RAW last year in Las Vegas a few weeks before Money in the Bank. In that promo, Punk was going to tell a personal story about Vince McMahon that was related to the WWE’s anti-bully campaign when his mic turned off. Punk said that he told the WWE to cut him off when he started talking about Vince. That was the signal to end the promo. Punk said that all he would have said was that the WWE is doing an anti-bully campaign and Vince is a bully. Someone asked Punk about the nWo coming back and Punk said that it could come back, but he is not going to be involved with it if it does happen. Punk was asked what else he wants to accomplish in the WWE and Punk said he wants to be in the main event of WrestleMania. Punk gave an update about the new WWE Championship belt, but all he said was that they are working on it. He answered other questions, but they weren’t very newsworthy. After he answered the last question, he thanked some people in attendance which included his best friend, mom, and sister. Punk told us we didn’t have to go home, but we couldn’t stay in the theater and that ended the night.

I enjoyed the premiere. It was great to see the documentary a little bit early and it was great to watch it while knowing that CM Punk was watching it with me somewhere in the same room. Thank you CM Punk for showing your documentary for free and thanks for the free cookie too…it was delicious. I’m sure CM Punk considers this to be one of the greatest nights of his life and attending CM Punk’s DVD premiere ranks right up there with attending his WWE Championship win over John Cena at Money in the Bank.