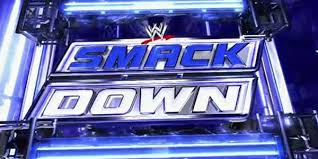 Welcome to Laying The Smackdown. WWE Smackdown is in San Jose, California this week. Josh Mathews and JBL are the announcers tonight. Smackdown starts with a K.O. Punch vs. Brogue Kick contest hosted by Booker T. The contest will determine who has the most devastating finishing move. Smackdown has a  machine that scores hits on a speed bag based on how hard the bag is hit. The machine is similar to the one that was used during one of the rookie challenges in NXT season two. Alex Riley won that challenge and he’s the only rookie from that season that still occasionally appears on WWE TV. Sheamus goes first and his Brogue Kick registers 1,322 pounds per square inch. Big Show is next and his K.O. Punch (aka the WMD) registers 1,809 pounds per square inch. Big Show is the winner of the contest. After Big Show leaves, Tensai attacks Sheamus from behind.

Sheamus won with the Brogue Kick. This was a fight more than a wrestling match. It was a little bit better than what I was expecting. The time length of the match was 3:34.

After a commercial break, Ricardo is looking for Orton. He hears a hissing sound and gets scared, but it’s not Orton. It’s the Cobra and Santino. Was Ricardo really expecting to see Orton after hearing the hissing sound? Does he know that “The Viper” is just a nickname?

Heath Slater and Jinder Mahal vs. Santino and Zack Ryder

Before this match, the trio of Slater, Mahal, and Drew McIntyre cut a promo and explained that they are now a band because they weren’t doing anything great as solo acts. So far, the only thing I like about this stable is that McIntyre is getting more TV time. I didn’t like this match because I hated this match-up. Slater and Mahal are two of my least favorite superstars and I’m not a Zack Ryder fan. I like Santino, but I like his gimmick more than his wrestling skills. I don’t know why Mahal was teaming with Slater in this match instead of McIntyre. Mahal has never been a tag team champion and McIntyre once was one-half of the WWE Tag Team Champions with Cody Rhodes. They won the match so it doesn’t matter, but McIntyre would have been a more logical choice. In my opinion, he is the best of the three members in the band. The time length of this match was 3:50.

Smackdown shows a Tout of Dolph Ziggler challenging Kane to a match.

Kane won this match after Dolph Ziggler got disqualified for hitting Kane with his Money in the Bank briefcase. I liked the effort by both Kane and Ziggler in this match. The time length of the match shown on TV was 7:03.

After the match, Daniel Bryan enters the ring to help Kane, but Kane has knocked Ziggler out of the ring. They argue because Bryan said he saved Kane and then Matt Striker interviews them. Striker says to Bryan that people think he might be the weakest link of the group and Bryan puts the No Lock on Striker. Then Kane hits Striker with a chokeslam.

Backstage, Ricardo is still looking for Orton. He walks by a closed room and he hears Orton’s voice coming from inside the room. Orton’s voice sounds more robotic than usual. Ricardo opens the door and finds out that the voice is coming from a robot. Hornswoggle is playing with a Randy Orton Brawling Buddy doll.

The Miz is ringside and Smackdown shows highlights of Miz’s segment with Larry King on RAW last Monday.

Big Show won with the WMD. This wasn’t a squash match, but Big Show won easily. Kofi got in some offense, but not a lot. The time length of the match was 2:13.

After the match, The Miz cuts a brief promo in the ring with Kofi on the mat. Miz vs. Kofi will happen next week on WWE Main Event.

Some WWE fans Tout about who CM Punk should face at the Hell in a Cell Pay-Per-View.

In the locker room, Daniel Bryan tells Alberto Del Rio that they have a match tonight. Short segment, but I enjoyed it.

In Booker T’s office, Kaitlyn, Layla, and Teddy Long tell Booker that Aksana found a blond wig in Eve’s bag. Then Eve walks in and says she found a blond wig in Teddy’s bag. Why would Teddy have a bag? What would he put in it? His old referee gear in case of an emergency? All of the women argue and Booker asks Kaitlyn and Layla to leave the room with him so they can talk about it.

Sin Cara won after hitting Sandow with a hurricanrana. That was an okay match, but it needed more time. The time length of the match was 3:17.

Backstage, Daniel Bryan tells Kane to not come out to rescue him if he appears to be in trouble. Kane says he won’t.

Del Rio won after Daniel Bryan tapped out to the cross armbreaker. This was a good match. My only complaint is that it wasn’t long enough. I think this would be a great PPV match-up. The time length of the match shown on TV was 6:48.

After the match, Del Rio cuts a promo about Randy Orton in the ring. When the promo is over, Del Rio gets ready to hit the mat like Orton does before the RKO and Del Rio goes to face-to-face with Orton! Where did he come from? Orton does some ringside brawling. Ricardo breaks up the fight and that helps Del Rio run away. Orton hits Ricardo with the RKO on the table.

Del Rio had a good match with Daniel Bryan and he got the win. That was a big win for Del Rio and he has now forced both Orton and Bryan to submit to the cross armbreaker. There was a lot of Del Rio this week. In addition to his match, he had two locker room segments and he cut an in-ring promo after his win.

I think Ricardo is one of the funniest characters in WWE. It seems that everything he does is fun to watch. I enjoyed watching Ricardo trying to find Orton backstage.

This week’s Smackdown was not much different than other episodes. There’s too many bad matches each week and many of them don’t get a lot of time. Maybe Smackdown should consider reducing the amount of matches. I think having at least six matches every week is too much. Unlike RAW or PPVs, Smackdown isn’t three hours. I’m not enjoying the current storylines on Smackdown. I want to like the Sheamus-Big Show storyline, but Big Show has lost every big PPV match he has had this year except for WrestleMania. Big Show needs an impressive win before I can take him seriously. Defeating Kofi Kingston is not good enough. I don’t care that he had the best score in the finishing move contest. Big Show is the World’s Largest Disappointment.

25 thoughts on “Laying The Smackdown”