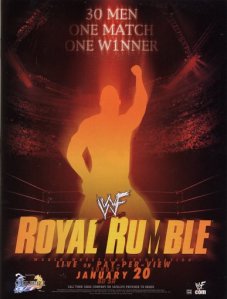 Welcome back to another installment of “I Can’t Believe It’s Not Russo.” This week we’ll be entering 2002 in our reimagined “Invasion” angle with the build-up and one of the WWF’s main events of the year, the Royal Rumble.

Previously we saw ECW being incorporated into WCW as Ric Flair bought the promotion. Paul Heyman found himself out of a job for betraying Vince and Flair having no place for him in WCW swearing revenge on everyone concerned. DDP also became WCW champion after winning the belt from Sting, who chose to leave WCW after he perceived the wrestlers and the fans as turning their back on him because he wasn’t there to help the guys who were taken out by Vince and the WWF in the run up to King Of The Ring.

At the end of the year, we’d see Kevin Nash and Scott Hall debut (only a month or so removed from their debut in reality – Hogan, Nash & Hall debuted as the nWo at No Way Out in February 2002). They’d be brought in by Vince as a “Christmas Present” to WCW. Nash and Hall thank Vince for signing them, but that they do their own thing and will go where they want, when they want. They leave, leaving Vince standing there almost crying at how events have turned against him. Later in the show, they go and find the number one contender Triple H, who would be facing Austin at the Rumble for the WWF title. They would play off the Kliq and appear friendly, and would give HHH a gift with a “friendly piece of advice”: if you’re not with us, you’re against us. Either in the closing moments of the show or at the Royal Rumble, Triple H reveals that the gift was an nWo tshirt. If it was on Raw, Hall and Nash would tell Triple H that he has until the Rumble to reconsider (if it wasn’t, he’d be told in the segment on Raw).

On Nitro things would be pretty standard actually. The only thing of note would be that Sting would appear to draw a number for the rumble and be one of WCW’s entrants into the event. We’d be generally trying to rebuild Nitro as a program and WCW as a promotion to make the eventual head to head matches really mean something, especially given the damage that had been done to WCW in its final years under horrible creative teams (not excluding the genius who inspired the title of this column) and bizarre angles
Royal Rumble

The 2002 Royal Rumble would be a bit of a turning point in the angle (the main event would be a 30 man, 15 men from each company match where the winner could challenge whichever title holder they wished to face in the main event at Wrestlemania). The main confrontations of the Rumble match itself would be noteworthy, but there would also be Triple H’s answer to Hall and Nash.

After the first match, Hall and Nash would call out Triple H. Triple H would reveal the gift of the NWO tshirt, and Hall and Nash would press for an answer. Triple H would tell them that he regards them as friends and always will do so, but he can’t accept and be part of the NWO. Hall and Nash would press him to reconsider, stressing that regardless of their past the bottom line is if you’re not with the outsiders then you’re against them. Triple H apologises, but would re-iterate that he can’t accept. Hall and Nash are silent, then leave. They would end up costing Triple H the WWF title in his match against Austin via interference and leave him battered and broken.
Moving onto the Rumble match itself, Undertaker would be entrant number one. Taker would make quick work of the first few guys regardless of company, till maybe entrant number 6 or 7 comes out who would be…Sting. Taker would be out for revenge, given that it was his failure that allowed WCW to live and he would’ve been given a hard time by the WWF roster for his failure in not getting the job done. Taker eliminates Sting, evening the score. While Taker is revelling in pulling it even, he’s eliminated by one of the WWF’s young heesl (I was swithering over Edge or Jericho, but I think I’ll go with Edge) who Taker would then go on to feud with till it was time to re-ignite things with Sting in time for Mania (sorry if that counts as a spoiler, but surely you saw where that was going!).

While Sting and Taker were ducking it out, the match would become a standard Rumble match: crowded, chaotic and generally insane. There have been 29 entrants, 15 WWF and 14 WCW guys. The countdown starts to the 30th entrant. Goldberg’s music plays and we see the debut of Bill Goldberg to the Invasion angle. He lays waste to everyone and wins the rumble. With his victory, Goldberg wins the right to be in the main event of Wrestlemania for whichever title he chooses to compete for.

With the completion of the 2002 Royal Rumble, we also reach the conclusion of this week’s column. I sincerely hope you’re enjoying the series thus far and that you’ll join us next week for The Road To Wrestlemania where we’ll really get to business in picking up from the aftermath of the rumble and building up to a spectacular Wrestlemania X8 Invasion style!

12 thoughts on “I Can’t Believe It’s Not Russo: The Invasion-Royal Rumble”