Welcome to the last instalment of our rebooking of the Invasion angle. This is what the build has all been towards. After starting out in the culmination of Wrestlemania X-Seven, we reach our end game. So sit back and enjoy, it’s time for Wrestlemania X8, Invasion style!

For any readers who are new to the series, and only seeing the finale, I would strongly advise you to read the other parts to the series first. The individual parts can be found at the links below

All caught up? Good. Let’s get on with it!

This match would come about due to Jeff Jarrett’s abuse of Dusty Rhodes. It would play off of the past and that Dusty worked under Jerry Jarrett and that relationship. After a few weeks of Jarrett abusing Dusty, Goldust (Dustin Rhodes) would show up and tell him to fight someone who could defend himself.

Goldust picks up the win. Jarrett would take control but would get distracted in going after Dusty, which would cost him as Goldust takes advantage and gets the 1-2-3 over Jarrett. ~Father & Son celebration to kick off Mania X8

Given that in reality Eddie came back 1st April 2002, I’m sure his return could have been fast tracked in time for a Wrestlemania showdown against another of his Mexican heroes. On Nitro, Ray would have been positioned as the quintessential babyface, luchadore national treasure type of guy. Eddie would come in a basically call him out on being an absolute joke and a disgrace to Mexico, saying that he is the man who is a true ambassador and hero for Mexicans.

Eddie wins via interference from Chavo or through other nefarious means. “I Lie, I Steal, I Cheat!”

Lance Storm and Chris Benoit. Two of the best pure wrestlers in recent times for just sheer ability in the ring. Given that Wrestlemania X8 took place in Toronto and that they both trained in the Hart Dungeon, we’d bill it like that. Very few thrills, this would just be a wrestling match and something very different to what the rest of the card would be. Storm was a relatively big name in the dying years of WCW, he was the US Champion and had been feuding with Booker T, WCW’s world champion at time of closing. Similar attributes, both great in the ring but neither were particularly great on the mic.

As I’ve said before, this would be a clinic. Storm would go over as I think he had the potential to achieve more in the WWF than he ended up achieving, and I think a win over Benoit could’ve helped him in the long run. There’s respect between the two of them after the match, which I’m sure would’ve have went over extremely well with the Toronto crowd.

O’Haire and Palumbo are the WCW tag champs, but on the WWF side The Dudleys, The Hardy’s and Edge and Christian are still all feuding over the belts. Over the course of the year other teams would’ve been involved in the tag team picture, but as we approach Mania it’s really bitter between three of the most iconic teams in WWF history.

This is a bit thrown together. Jericho and Booker T are fantastic wrestlers but given how we’ve put this together there’s very little obvious place for them. However, I read in one of Jericho’s books that Booker T refused to work with Jericho when he was in the Crusierweight division in WCW, so you could play off that. Jericho would call out Booker T for being one of the primary examples of a guy who held young, talented guys down so that older guys who were no longer relevant could keep their spots. I’ve no doubt Jericho and Booker could make it work given that they’re both talented guys, and I think it could be a decent little feud to supplement what’s at the top of the card.

Jericho wins in front of his home crowd with the Lionsault.

Angle is a legitimate Gold Medalist and Steiner looks like he could rip your head off. They’d basically challenge each other to see who could deal and endure the most amount of pain: submission match.

Steiner wins it through sheer power. Angle passes out in the Steiner Recliner, but doesn’t tap.

The first of our marquee matches. This started when Triple H turned down Nash and Hall’s attempts to be brought into the fold in the teased reformation of the nWo. They cost Triple H the world title at the Royal Rumble in a match with Austin, and Shawn Michaels came back to attempt to stop the infighting within the Kliq. After Hall and Nash refuse to call a truce and go ahead with their 2-1 match against Triple H, HBK announces that he’s going to team with Triple H to even it up.

Michaels came back around 3 months after Mania, so I do think there is a possibility that he might’ve agreed to come back for the event. If he was still worried about his back, then Triple H would have to carry the in ring work, and keep HBK’s work in ring down to an absolute bear minimum to protect him. HBK & Triple H pick up the win, although it really could go either way. I don’t see there being any issues if someone was asked to job given that they all get on and are noted to be friends. You could have Nash and Hall win to build them, but HBK coming back and getting the win at the grandest stage of them all is a great story to tell in my opinion.

Since his purchase of WCW, Ric Flair has proven to be a thorn in the flesh of Vince McMahon at every turn. After trumping the WWF at King Of The Ring by arranging Sting’s debut and his stealing ECW from right under his nose, Vince has been looking for revenge. He attempts to bring in Hall and Nash as a “Christmas Present” to kill WCW and take out Flair. Unfortunately for Vince, Nash and Hall refused and chose to do their own thing, instead going after Triple H.

Vince turns to the man who made the WWF into the force it is to get Hall and Nash on track. Hogan stated that Nash and Hall will do their own thing, and until they’re ready there isn’t a lot he can do about it. But he says that he’ll take out Flair, and that he’s been kicking his ass for the best part of two decades. Hogan turns up on Nitro and calls Flair out. Hogan tells Flair that he knows why he’s here and challenges him to a Street Fight. Flair says that he’s had enough of Hogan, and that he will not allow him to nearly kill WCW all over again. Flair challenges him to end this once and for all at the grandest stage of them all: Wrestlemania.

This match only goes about 6 or 7 minutes before we have a run in. Chris Jericho, Chris Benoit, Lance Storm, The Dudley Boyz, Rhino, Raven, Tommy Dreamer & Rob Van Dam basically beat the crap out of the two icons of both promotions so severely that they can’t move. They leave through the crowd, and EMTs go to check on Hogan and Flair. Both are carried out the arena. No contest.

As we all know, Sting saved WCW by winning the King Of The Ring tournament by defeating The Undertaker for the final. The Undertaker eliminated Sting from the rumble to even the score, and Sting took to hanging out in the rafters silently stalking The Undertaker after leaving WCW after he perceived the fans and the other wrestlers had turned their back on him. Undertaker challenged Sting to a match to settle the score.

Very back and forth match with a plethora of false finishes. Undertaker kicks out of the Deathdrop and escapes from the Deathlock. Sting kicks out of the Last Ride and Tombstone. The end enters its’ end when Sting then hits the Stinger Splash followed by the Scorpion Deathdrop, akin to King of the Ring but unlike King Of The Ring Undertaker kicks out. Sting can’t believe it. Undertaker sits up and hits Sting with the Last Ride, but instead of going for the pin picks him straight back up and Tombstones him to hell.
1-2-3, and Undertaker continues the streak. Undertaker waits for Sting to rise and offers him respect, Sting just looks at him and leaves without a word.

Diamond Dallas Page was one of the first guys to come into the angle. He carried the flag for WCW, fighting in King Of The Ring on their behalf despite being injured during a few attacks by WWF guys before being beaten brutally by the Undertaker. DDP recovered and took the belt from Sting, who then went back into the shadows as he perceived the celebrations that met DDP’s victory as a betrayal. DDP then proceeded to beat the guys who were the other championship contenders and issued an open challenge on Nitro to anyone to face him at Mania for the WCW World Championship, which was greeted by The Rock who, as The People’s Champion, wanted to face the Champion of the People: Diamond Dallas Page.

Rock takes the victory over DDP and becomes the NEW WCW World Champion. DDP was winding down in 2002 anyway, as years on a full time schedule took their toll on a guy who was in his late 40s. Rock and DDP would show each other respect as well.

Very simple. Goldberg debuts at the Royal Rumble winning the 30 man match up. He then had the choice to face either the WWF Champion or the CW Champion in the main event of Wrestlemania. Goldberg announces that he came back to help WCW win this war, and that on a personal note there’s one person that he wants to beat above all others: Stone Cold Steve Austin- You’re Next!

Austin would use whatever tactics he could think of and would look as though he had the job done, but Goldberg takes the win and the title. The show goes off air with Goldberg celebrating with the WWF title in hands. As much as I loved Austin, his career was coming to a head as well, and I think this would’ve been the ideal opportunity for him to pass the torch. It’s not idea having Goldberg in a position to carry the company, but he was over and it would’ve made money. It’s as simple as that, so you’d have to find a way to make it work with Goldberg and work together.

And that, my friends, is the end of the angle. I was going to continue with a few ideas about where we could take things from here and where we would eventually end up, but this has been quite a long article in itself. If I continued I don’t want to think how long it would end up being! If there’s any interest I’ll write it up and put it up as an additional, FINAL chapter to the angle that would go into a bit more detail and elaborate on a few of the happenings at Mania and the thought process behind it. If any of you guys want it, let me know and I’ll get it written up for Friday. 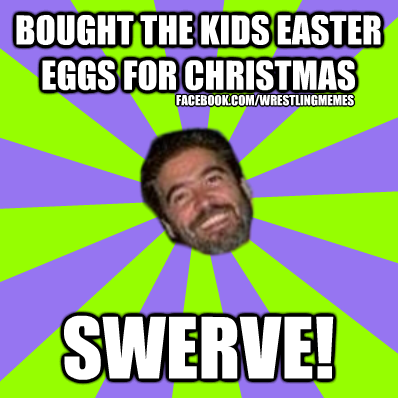 10 thoughts on ““I Can’t Believe It’s Not Russo”: The Invasion-Wrestlemania X8”