Beginning back in January 2012, the Tanahashi/Okada feud took many by surprise as the pair began having great matches within weeks and became the talking point of New Japan. Okada won the first encounter in February of that year, Tanahashi the second bout in June and things were pointing towards a ‘rubber’ third match on January 4th of this year. Tanahashi shocked everyone by beating Okada in what many thought was going to be the ‘Rainmakers’ night. Okada rebounded by winning the New Japan Cup in March setting up Tanahashi/Okada IV for April 7th for NJPW Invasion Attack. Hiroshi’s IWGP Heavyweight Chapionship was on the line.

They start off by grappling in the ropes and exchanging fluid counters. ‘Ace’ plays head games by going for Okadas own finisher: the Rainmaker clothesline. He manages to duck and responds with a slap and a big boot, then a rear chinlock. Tanahashi breaks free and works over Kazuhika’s right arm in order to ‘take out’ the Rainmaker. Taking it to the ring apron Hiroshi attempts a leg whip but Okada powers out, lands a big boot and nails a sick looking DDT on the apron. Back in the ring Okada applies a submission hold I have never seen before or can describe accurately. You should really see the match to find out what it is.  The crowd applaud him for his originality. Tanahashi tries a gut wrench but Okada powers out with a clothesline for a two count. After ducking a cross bodyblock Okada applies a reverse crossface. Hiroshi gets to the ropes.

Tanahashi then repeatedly kicks his foes bad arm but Okada gets a leg whip and dropkicks him under the ropes. Ringside Okada chokes Tanahashi on the guard rail and attempts a Tombstone. Tanahashi wriggles out and spears Okada into the rail. The right arm is targeted again, slammed into the ring post. Back in the ring Tanahashi is now getting cocky with a pair of arm whips. He then repeatedly elbows one side then uppercuts the other side of the bad arm as the fans ‘Woah!’ as one. Okada catches a charging Tanahashi with a Flapjack and drops him with a modified Kryptonite Crunch. Tries for a Tombstone but Hiroshi swings out onto his feet and they exchange slaps. Okada lands a perfect standing dropkick and applies an inverted Figure Four crossed with an STF. Another great submission hold that has to be seen to be believed.  Fans are pumped now. Tanahashi with a cross arm Suplex for a nearfall. Juvi’ Driver in the corner and he climbs the ropes but Okada nails another great dropkick, sending Tanahashi to the floor. Using the guard rail as a prop, Okada delivers a Randy Orton-type draping DDT onto the ringside mats. Hiroshi just makes it back in the ring before the 20 count as young girls in the crowd cry for their ‘sexy boy’.

Tanahashi, taking control, gets the bad arm again. Ducking a clothesline Okada goes for the Rainmaker but it is blocked by both arms, Tanahashi attempts a German Suplex which  is reversed into the Rainmaker for a thunderous gasp from the crowd! He can’t get the cover so goes for another Tombstone which this time is turned into a cradle but Okada quickly rolls back and locks in the inverted Figure Four/STF. The audience are going crazy. ‘Ace’ just gets to the ropes, in a brilliant display of teasing a tap out. Tanahashi fights back by going for the bad arm again. Lands a cross bodyblock off the top and a Tiger Suplex for a super close nearfall. Nails his finisher, the High Fly Flow splash, on Okadas back and turns him over to do it again. Okada gets the knees up as the crowd scream in approval. Okada goes for the Tombstone again but Tanahashi counters, Okada tries again but both end up locked in gut-wrench type waist locks. Tanahashi tries to work over the bad arm and is nearly caught by the Rainmaker. He puts Okada in a Tombstone of his own but it is countered when Kazuchika finally nails the move. He picks up Hiroshi and blasts him with the Rainmaker to get the pin and regain the IWGP Heavyweight Championship.

Okada, as new champion, is challenged to a title match by former friend Minoru Suzuki; the match is set for May 3rd. Tanahashi will clash on the same show with Karl Anderson. Tanahashi/Okada IV lived up to the hype with worldwide praise. Dave Meltzer of the Wrestling Observer gave it a rare 5 out of 5 stars rating. Anyone who is a wrestling fan owes it to themselves that they watch this match. 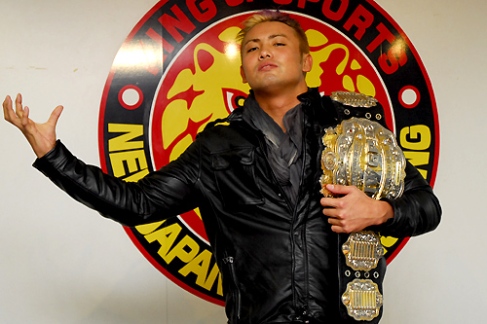