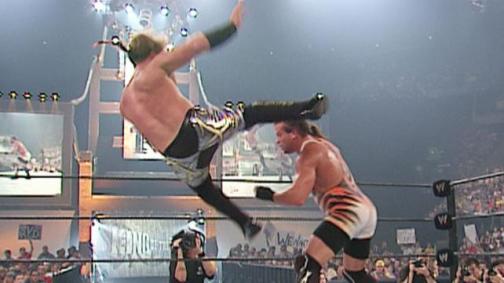 Last week, Rob Van Dam and Chris Jericho had a very entertaining match on RAW. I thought it was going to be one of those matches that looks like a good match-up and ends up being disappointing. I was wrong. I enjoyed the match a lot and I was a little bit surprised to see RVD and Jericho performing at a high level in 2013. Both men are 42 years old and have been wrestling for 20+ years.  They really turned back the clock and it felt like I was watching an old RAW match that happened several years ago. RVD impressed me the most because he did some impressive spots that I wasn’t sure he could still do. That RAW match wasn’t the first RVD vs. Jericho match in WWE. I have RVD’s WWE DVD and I remembered that one of the matches included on the two disc set was RVD vs. Jericho from King of the Ring 2002. I thought that was a good match to review because I wanted to see how last week’s RAW match compared to a match that happened 11 years ago when RVD and Jericho were in their prime.

All right, I’ve had it. You want a war? Now you’ve got one. I’m suffering from a bout of Insomnia, so I decided to go on the web and check out the reviews of the King Of The Ring from tonight, more specifically on the PW Torch website. After reading what all of you “Smarks” (and believe me, you are all still marks) had to say about my match and the show, I am furious.

Everybody has the right to an opinion and here’s mine. I am sick of all you holier than thou, pompous jackasses. That’s it. That’s all. Baby goes to sleep now. I had one of my best matches of the year tonight with RVD, that featured 20 minutes of tremendous action, innovative false finishes and an absolutely tremendous crowd. It was everything I could’ve asked for in a match and it was in my opinion, an off the charts performance from RVD and myself, match of the year calibre. I was so excited about the contest and I can humbly state that we stole the show. The crowd was so into it that they were burned out after we went on, quiet for the next 3-4 matches. They ate up every move from start to finish, they enjoyed the hell out of it.

But now I read the opinions of some of you. Many of you state that the match was very good or excellent. I agree. But many others are saying that the match was slow and predictable with one jackass even saying that it was one of the worst matches of my career!!! How can you honestly say that? What the hell do you people want? What is it that you are looking for? We go out there and bust our asses to entertain you (and if the Columbus fans were quiet, they sure as hell weren’t during my match, they were entertained) and your thoughts were that bad?

Well if you didn’t like my match tonight, then you are out of luck if you’re a Jericho fan, cause it was the best you’re gonna get, jerky. That was CJ at his finest. Wrestling at it’s finest. A great 4 1/2 star performance with an tremendous build, a great crowd and an awesome match. If you didn’t like it, then stop watching me and stop watching the WWE and take up bowling, cause you will never like anything we give you.

I’m the first one to admit when my performance is not up to snuff, or when something was bad and I’m the most self critical person on the WWE roster, but tonight’s performance was me at my finest. Didn’t like it? Get the F out then and good riddance to you.

For all of you that enjoyed my match I say thanks. For those that didn’t like it, I don’t care cause I’m through with you.

I am now finished with the internet and I’m finished with this sight because I hate what you marks are doing. You’ve spoiled it for me. You’re negativity is ridiculous. You all come off like a bunch of bitter know-it alls, who won’t be happy with anything we give you. Nothing is ever good enough and quite frankly I’m over it. You are the same people that are saying that Attack of the Clones is boring, analyzing every little detail, instead of allowing yourselves to be entertained.

It seems that all of you wish the wrestling business would dry up and die, because some of you dislike EVERYTHING we do. Is it always good? No, but we are killing ourselves to try and entertain you and if you don’t respect that then kiss my ass. I want the business to be around forever and I am doing my part to keep it great and I did that tonight, no matter what any of you think.

One of the best wrestlers in the world and one of the performers in the best match of the night and match of year candidate from the KOR,

I thought about giving this match four stars, but I couldn’t do it. The last few minutes of this match were very entertaining. I enjoyed the match a lot and there were at least three near-falls that were good false finishes. It was very good, but not great and that’s okay because the opening match on a PPV rarely produces great matches compared to the main event match. The match needed a little bit more PPV quality spots. I like seeing wrestlers do spots on PPV that they don’t usually do on RAW or Smackdown and I didn’t see enough of that in this match. If the match had a spot that everyone was talking about the next day, maybe that would have been enough for it to be a great match. The problem I have with this match is that there was nothing memorable that happened. Compared to the match they had on RAW last week, this match had a better story with the near-falls and it being a King of the Ring tournament match with a spot in the finals on the line. The RAW match had better action and spots. It’s hard to say which one I liked better because I enjoyed both matches.

Another match RVD and Jericho had was at Unforgiven 2001. I watched it, but I decided not to review it because I liked the King of the Ring match a little bit better. The Unforgiven match was a hardcore match and it wasn’t as hardcore as I was expecting it to be. It wasn’t a terrible hardcore match, but I had my expectations too high for the two former ECW stars. It had too much wrestling, I wasn’t impressed by the hardcore spots and I didn’t like the run-in that happened at the end. Some of the spots were good, but they were recycled spots. It felt more like a no disqualification match than a hardcore match and there is a difference between those two matches. A no DQ match means weapons are allowed, but aren’t required. A hardcore match means it is expected that weapons are used often during the match. I didn’t enjoy it very much, but I seem to be in the minority. The Unforgiven match got better reviews than the King of the Ring match so try to watch that match if you can. I think fans liked it because it told a story better than most hardcore matches do, but those matches should be spotfests and not feature so much psychology and strategic wrestling. I think that wrestlers should work their match based on the match gimmick. Technical wrestling should be little to none in a hardcore match. The Unforgiven match is on YouTube at http://youtu.be/9YXBmb9fwGA. I think if I didn’t watch the match expecting to see a hardcore spotfest, I would have enjoyed it more. I have watched three Rob Van Dam vs. Chris Jericho matches in the last several days and my conclusion is that their matches fall short of being considered classics, but they are fun to watch.